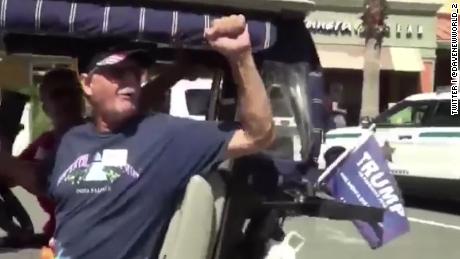 Donald Trump retweeted and deleted a video of some senior citizens arguing back and forth about politics. One old man who supported Trump sarcastically yelled “White power” as he was being harassed by some elderly anti-Trump assholes calling him a racist or whatever.

If this is the video Trump retweeted and then deleted, White Power is the first thing said in the video!!! So I’m not sure how you can pretend you can’t hear it. It’s like pretending you don’t get military briefings.
pic.twitter.com/d29vgzLfXD

The video is amusing but Trump’s retweet of the video has made everyone go nuts because it had that old man sarcastically saying “White power.”

White House asserts that President Trump "did not hear the one statement made on the video” showing a man in a golf cart with Trump campaign gear shouting "white power." The tweet that the president shared has been removed from his feed.https://t.co/xHtpcGqVVv

Dear @JuddPDeere45: You are lying when you said @realDonaldTrump did not hear the one statement. White power was repeated multiple times. You can’t watch that video & hear other words but not those words.

The American people are not stupid. Stop treating us as if we are stupid. https://t.co/Su6V4vKlAS

He’s apparently saying that this was an accident, but I don’t believe that. I believe it was a deliberate signal to his White supporters and an attempt to shore up his base.

But the thing is that we need more than this. There is a communist revolution underway in America and if they take over the presidency later this year, they’re going to let the blacks go nuts killing every White person they come across.

Trump seems to have been trying to do some things with the statue removals etc.. but the culture war is being lost. At this point, I wouldn’t be shocked if the Republican Party would agree that the American flag is racist and vote to have it banned.

If Trump doesn’t fire Kushner and his bitch daughter, he’s not serious.