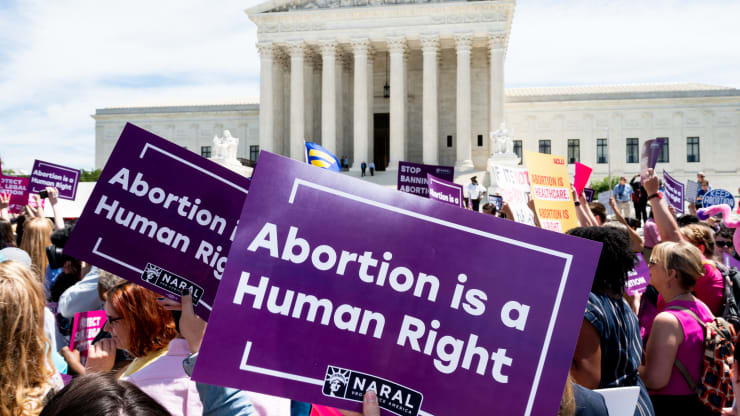 The Supreme Court has once again agreed that murdering babies is a human right. Just like these stupid ass cunts in the above picture are claiming.

John Roberts sided with the Jewish communists agreeing that abortion is a great thing and must be made available to as many stupid sluts as possible.

The Supreme Court on Monday voted 5-4 to strike down a restrictive Louisiana abortion measure in a major win for reproductive rights activists, with Chief Justice John Roberts siding with the court’s four liberals.

Justice Stephen Breyer, who authored an opinion joined by his fellow Democratic appointees, wrote that the law placed an undue burden on women seeking abortions. Roberts wrote separately to say his thinking was based on the court’s precedent.

The case involved a Louisiana abortion law requiring doctors who provide abortions to have admitting privileges at a hospital within 30 miles of their clinic. Challengers of the law alleged the restriction would limit the state to just one abortion provider at a single clinic.

The dispute was the first over abortion to be argued before President Donald Trump’s two appointees, Justices Neil Gorsuch and Brett Kavanaugh. It came just four years after the top court ruled that a similar abortion law passed in Texas was unconstitutional.

In that 2016 case, Whole Woman’s Health v. Hellerstedt, the court struck down the Texas law by a 5-3 vote. Roberts voted at the time to uphold the law.

In his opinion on Monday, Roberts said that the legal doctrine known as stare decisis, or the principle of adhering to precedent, “requires us, absent special circumstances, to treat like cases alike.”

“The Louisiana law imposes a burden on access to abortion just as severe as that imposed by the Texas law, for the same reasons,” Roberts wrote. “Therefore Louisiana’s law cannot stand under our precedents.”

And why isn’t the issue of abortion being decided at the state level? This is not something that should be decided at the federal level. But since we’ve pretty much abolished the Constitution because everyone is scared of the flu, I guess this discussion probably doesn’t even matter. Shit just happens arbitrarily and it seems to almost always go in favor of whatever the Jews and communists want.

Roberts wrote based on court precedent? Roe v Wade was based on lies.