A Rough Guide To Single Mothers

Well it’s a rough guide and you were warned.

Who the heck here would want to marry up a single mother anyways?

Besides those pinkos, white-knights, borderline betas and bluepill men who think all women are good and that biomechanics don’t work apparently, who the heck in the world is going to want to eat what has already been eaten by another man? That’s common sense heck and if not common sense at least enough self-esteem likely to get yourself something decent! Childless virgin women might be harder to get but at the end the effort will always be worth it as your family will be fully yours and you’ll be the father.

Single mothers think that you raising her child is your responsibility (somehow) because you’re her partner now, so they in their own vanity never ever are thankful for it because “you had to”. I don’t know why men with single mothers as their partners never take good advantage of it, considering most good sane men don’t want used-up women, as what they’re doing is literally killing themselves for what’s not theirs and never will and that deserves a big pay; that’s likely for you to have that woman serving you all the time doing whatever you like her to do, treat you like a king, or else you walk away and leave her alone with her child for a long time until another patsy comes by.

The worst part of being a father of a single mother’s household that’s not yours is that your genetic children will get to feel likely they are from another family; for sure the mother does the difference between her children and yours, sometimes not treating them equally and maybe feeling more love for her children because rarely does the woman think you are their father, she only will distrust. I can talk from experience from my life being born in such a setting and being the only children of my father of the three children my mother had; my brothers treated me pretty well tbh, yet sometimes my mother did such differences between me and my other two brothers sometimes treating me like the black sheep of the family. Having a children with a single mother is like walking on a minefield, you gotta be totally sure it will work well both for you and your soon to be children: it’s better to marry a non-used woman instead. Besides most of the time women won’t even appreciate the effort the man does if it isn’t enough, won’t even be a bit thankful and only demand even more. If you want a single mother for sometime only for the pleasure go for it, but don’t ever have a child with her: it won’t be good.

Childless virgin women might be harder to get but at the end the effort will always be worth it as your family will be fully yours and you’ll be the father.

Good luck finding one of those. Keep in mind, (((Family Court))) is no respecter of persons. The Blood of Jesus, The Holy Eucharist, Buddha, or 1488 can change that. Until we take women’s rights away, nothing will change.

If only we could repeal the 19th. I wonder if commies have the same dreams about repealing the 1st and 2nd? 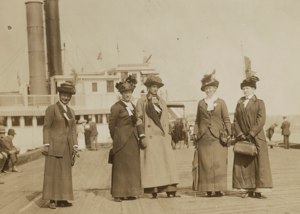 Anti-suffragism was a political movement composed of both men and women that began in the late 19th century in order to campaign against women's suffrage in countries such as Australia, Canada, Ireland, the United Kingdom and the United States. Anti-suffragism was a largely Classical Conservative movement that sought to keep the status quo for women and which opposed the idea giving women equal suffrage rights. It was closely associated with "domestic feminism," the belief that women had the righ...

Women’s Suffrage was the beginning of the end for the west.

Once only white landowners decided government representation. When that was forsaken, the lid was blown off for all types of insanity and we now find ourselves in interesting times indeed.

Imagine any of the signatories of our precious founding documents experiencing current year. That said, maybe the new Bill and Ted movie will be based.

who the heck in the world is going to want to eat what has already been eaten by another man?

Hate to tell you this bro, but unless you wife up a virgin, you already are.

Single mommies are crazy I’m glad I learned the mistake when I was young and got far away from her life is much better without the stress.